We Native English speakers do have full command of our dialect. But, we still aren’t proficient enough in it to be a good model for English as a Second Language students.

Our innate knowledge makes us mentally lazy when it comes to verbal precision. We feel that simply, effortlessly knowing the language is enough. We think that makes it something which we need not expend effort to utilize correctly. This is when all of the little quirks pop up which tend to confuse non-native speakers, rightly so. I suspect that it is this kind of thing from which the words “Irregardless” and “Ain’t” have forced their way into our lexicon.

Although, I know, from personal experience, that any language is difficult to learn, English is largely considered to be one of the hardest languages for non-Native speakers. Frequently, I have said that “English is the result of putting seven or so languages into a blender and hitting puree.” This stems from the fact that it breaks all of its own rules.

For example, a very common rule which we learn in grammar school is “‘I’ before ‘E’, except after ‘C’, or when sounding like ‘A’ in ‘neighbor’ and ‘weigh.'” This sounds like a useful tip for beginners. But, we break this rule (with a weird frequency) in English several dozen times over. Just right in the previous sentence, the rule “Never end a sentence with a preposition,” is broken as well. And, in that last one, the rule about “avoiding passive voice” is needlessly trampled upon. All of these instance lead to the incontrovertible conclusion that “English speakers do not necessarily make good English teachers.”

As such, it is up to me, and those pedantic people like me, to take up that particularly troublesome mantle. With it, I’ll attempt to wrangle these vicious cobras of venomous verbiage into something resembling a straight line of understanding for everybody else. It’s not a fate I would wish upon anyone else. But, I am just anal-retentive enough to pull it off. 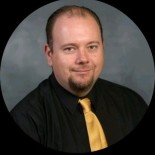 I was born in Hollister, CA, and I grew up in Sacramento. A life-long California native, I spent 13 years, from the ages of 16 to 29, writing and performing spoken word poetry throughout California.I performed frequently at venues in Sacramento like Luna's Cafe & Juice Bar, Queen of Sheba, and The Sacramento Poetry Center. Also, there were a few in Eureka, CA including: Ramone's Bakery & Cafe and The Ink People Center for the Arts. Moreover, I performed at venues in the San Francisco Bay area including but not limited to: Awaken Cafe & Roasting, The Starry Plough Pub, and The Sacred Grounds Cafe in downtown San Francisco. I have experimented with various styles including: sonnet, haiku, limerick, acrostic, and cleave poem.At those venues, I performed several different, original poems over the years. Some of my most prized were my homages; one is to Rudyard Kipling's poem "If..." simply entitled "When…," and the other is to William Blake's "The Tyger" entitled "The Jester." Furthermore, I have written other titles like: "The Run," "The Slogan of Change," No Soy Todo Blanco," The Decree of the Once & Future Poet," Altered Ego," I Could Say...," and "Beyond Reason."Afterwards, I went to UC Berkeley at the age of 29, and I majored in English with a minor in Creative Writing. Before and during my academic tenure, I held different jobs in the educational industry. Currently, I am married, living in Stockton, and working on my writing career.